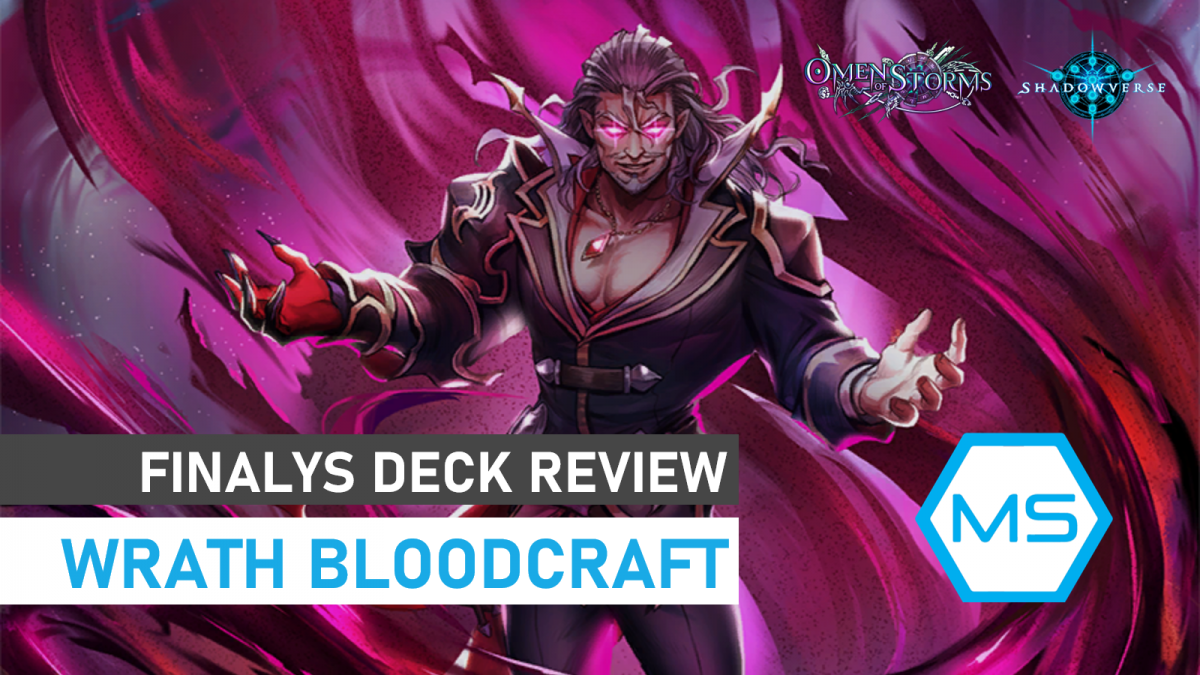 It’s your boy Finalys, the Bloodcraft lover and arguably the better Blood player in Manasurge, bringing you a deck that we are all too familiar with; Wrath Blood. This article is for those who wish to experience pain, or a challenge for those who are bored with the other meta topdogs out there.

As someone who’s dedicated most of his Shadowverse journey mastering Blood Arts (which is not included btw) and painstakingly climbed to GM with Wrath Blood alone, I think this warrants me some credibility to what will be detailed below. Some parts are up for debate and of course things may change as the meta evolves. I’m open for discussion and this is definitely what keeps the Shadowverse community growing.

Wrath Blood is first and foremost, an aggressive deck which also has control tools to venture into the late game if required. The name of the game is Wrath, which means you need to slap yourself 7 times in the face during your turn. Many of you reading this probably would have known by now; activating Wrath grants access to heals and burns damage, at the risk of putting yourself in precarious situations.

With a good draw and proper setups, you can close off games as early as Turn 5, or head for the control plan; drag it out to Turn 10 with a big ol’ Darkfeast Bat from Bloodsucker of the Night.

The following are cards that form the foundation of triggering Wrath. These cards, coupled with some others in the following Preferences section are powerful when used before Turn 5. As such, these cards are expected to be run at 3 copies, with the exception of Devilish Diva which some players may opt to run less copies.

Urias is undoubtedly the ace card of this deck which provides access to Avarice, and Bloody Claw which provides further burn damage. Evolving multiple Urias is usually a game winning move provided that your board state is relatively stable or, you are confident of closing out the game quickly. This card is so good that it warrants a keep during the mulligan stage.

Knight of Purgatory is the first payoff from activating Wrath, providing a nifty Ward while decreasing the size of your deck. That said, you’d never want to draw her in most games. Ideally, 1-2 copies are run in Wrath Blood but that’s really up to you.

In this section, the ratio of the cards can be tweaked according to the preference of the player.

While Arcane Wolf and Ball-and-Chain Ogre are excellent 1PP Accelerate removals + Wrath cards, there are subtle differences to consider. Arcane Wolf provides a Bane Rush which is useful for taking down pesky followers in the early game such as Guiding Bellringer Angel, but comes with a prerequisite of 1 damage to your leader first. Furthermore, the Arcane Wolf spawned takes up a board space which could be crucial in setting up Turn 4 board for Knight of Purgatory’s Invocation effect. This is where Ball-and-Chain Ogre comes in, which provides another 1 damage avenue without requiring any targets or prerequisites.

Razory Claw provides a further boost in the aggressive plan to close out games early. Corrupting Bloodlust on the other hand is better suited for “going second” situations; not only does it help to clear the board, it provides two damage to both leaders which do not impede on the Wrath plan. However, Corrupting Bloodlust is considerably bad going first or going into the late game. In a parallel universe Corrupting Bloodlust would be ideal to kill off your own Xeno Diablo (especially through its Crystalize effect), but those situations are rarer than finding a pig with lipstick.

Hermit of Lust is the new Wrath support that replaces Scrappy Werewolf in this expansion. The true strength of this card lies in the potential to create strong early boards once Wrath becomes active. That being said, some players have opted to include less or none of this card in favour for more active self-damage cards, which is justified since certain cards such as Sacred Gavel and Goblin Assault can mitigate it’s Ambush effect, rendering it a weaker Wrath activating card. Personally, I really like this card and it is a minimum 2-copies for me.

These cards are the ultimate payoff of Wrath; the finale that you’ve been waiting for. Combined with Bloody Claw from Urias, the damage output can easily scale upwards if your opponents are not careful with their followers and health. That said, it is advisable not to run too many copies as doing so will inevitably raise the probability of bricking in the early game.

On the other hand, Dark Emperor is akin to pineapple on pizza. In this expansion it is rather debatable if players should even run this card, but ultimately it is up to personal preference. The obvious payoff here is that Dark Emperor removes up to 3 followers (which may be important against Haven), but there are a few points to consider:

This is an overview of how the mulligan should roughly look like, however do be flexible about some of the card choices to keep.

Sekka Forest: Even
In some ways, Sekka Forest is similar to Wrath Blood which possess both aggressive and late-game options. The game is favoured towards the player who is able to achieve their conditions first (Aria effect & Sekka’s Storm effect on Turn 7). An important point to take note: Sekka Forest can exploit Wrath Blood’s early game and go hyper-aggressive with Phantombloom Predator, which may lead to awkward situations such as denying hand size through Vengeance during Urias’ evolve turn.

Rally/OTK Sword: Favoured
Swordcraft in general is way too honest in this expansion and do not create sufficient threats against Wrath Blood. As such, there is no specific cards to mulligan against Swordcraft in a closed list setting (but do follow the general idea). That said, it is advisable not to drag things out with OTK Sword in particular.

Spellboost Rune: Slightly Favoured
Wrath Blood has sufficient resources to clear large followers during the Chrono Witch + Guild Assembly turns. With Bloody Claw active, it is quite common to close games out by ramming Xeno Diablo into the opponent’s Chrono Witch board, if the Spellboost player is not careful enough. Dragging it to the late game might be a challenge since Force Barrier is a excellent tech card which spoils the game plan for Wrath Blood.

Whims Rune: The lucky player wins.
Do you like poker? Do you like blackjack? Jokes aside you should try to play aggressively before Whims of Chaos becomes active, but be prepared to inhale tons of copium when a certain blue bird clears your board.

Mysteria Rune: First Favoured, else Slightly Unfavored
The deck that has recently returned in the recent JCGs with considerable performance. The matchup against Mysteria Rune largely depends on the tempo and board state of the Mysteria player, which ironically may screw up the Wrath player on Turn 4 if there are no targets for Devilish Diva to trade into. Thus, the Wrath player should never keep Devilish Diva. If going second, attempt to drag to the late game and be mindful of the burn cards while maintaining high health.

Buff Dragon: Even
Unlike Spellboost Rune, Buff Dragon has access to Storm followers on top of having the ability to set up huge followers on the board. Wrath Blood has the resources to clear large followers but must be mindful of multiple Storms (especially if their attacks has also been increased via Celestial Dragoon etc.)

LastWords Shadow: Favoured
Funnily enough, killing a Deathcat Reaper on your turn actually helps with your Wrath game plan if your opponent decides to carelessly leave it on the board.

Evo Shadow: Even
The nerfs have significantly decreased the strength of Evo Shadow which gives Wrath Blood now a better edge in the early game. However, Skeleton Raider is still a threat if players are not careful enough.

Wrath Blood: First Favoured, followed by Urias’ favoured.
The player going first has both an advantage in the aggro and control plan. The player going first should find a way to deal enough damage to close the game with Darkfeast Bat, whereas the second player must find opportunities to end the game before Turn 10. The game becomes super lopsided when one player has Urias’ effects active while the other doesn’t. Additionally, Dark Emperor is rather tricky for the opposing player in the mirror game as it forces an evolution point in order to destroy it.

Evo Blood: Favoured
Evo Blood is comparatively slower in achieving its 6-evolve win condition as opposed to Wrath Blood, making Evo Blood a rather easy pushover especially with the recent nerf to Grimnir. Do take note of surprise Seox which may close the game on you sooner than expected.

Ward Haven & Heal Haven: First Favoured
Holy Saber is the bane of Wrath Blood, which therefore requires the player to adopt an aggressive gameplan to close out games ideally before Turn 8. In my experience, Ward Haven is easier to deal with compared to Heal Haven due to a less restoration cards included in the deck, which makes counting your damage more reliable.

Artifact Portal: Even
Ultimately, this matchup is largely dependent on denying the Turn 5 of the Artifact player. It is ideal not to drag out the game as the longer the game goes, the more potential for Artifact Portal to find ways to grind the game for OTKs.

So should you be playing Wrath Blood on Ranked? If you like Bloodcraft, absolutely!

Considering that Haven will most likely be the most popular class in this meta (assuming no upcoming nerfs), Wrath Blood does stand a considerable chance of winning provided that you stick to the aggressive game plan. Wrath Blood has a rather even matchup across most of the decks in the meta right now; it is more dependent on the skill of the player (to draw Urias and pilot the deck) rather than a luck-based one.

What about tournaments? We’ll have to look at more tournament statistics, which means… time to keep a lookout for JCG stats that are released, and community tournaments which are valuable testing grounds for upcoming SV Weekends and SVO. At this point of writing we see more JCG players picking up Wrath Blood as it is a flexible deck that is able to adopt both an aggressive and control play style, depending on the flow of the game.