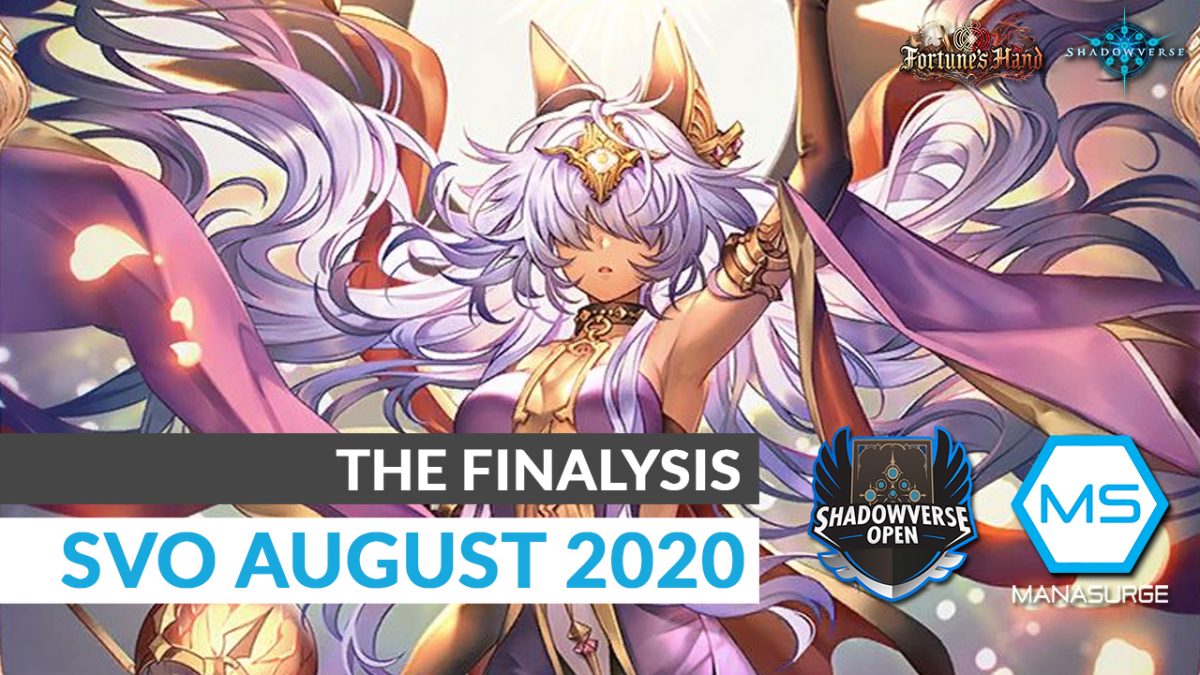 It’s finally time for the monthly SVO analysis! As the mini-expansion for Fortune’s Hand approaches, let us take one last glimpse at the current meta.

For new readers, the purpose of the SVO analysis is to explore what are the popular decks and lineups. For more information regarding SVO and the methodology taken in analyzing the data, you can refer to July’s analysis.

This month’s analysis is going to be a relatively short one. So without further ado, let us look at the performance for both regions! 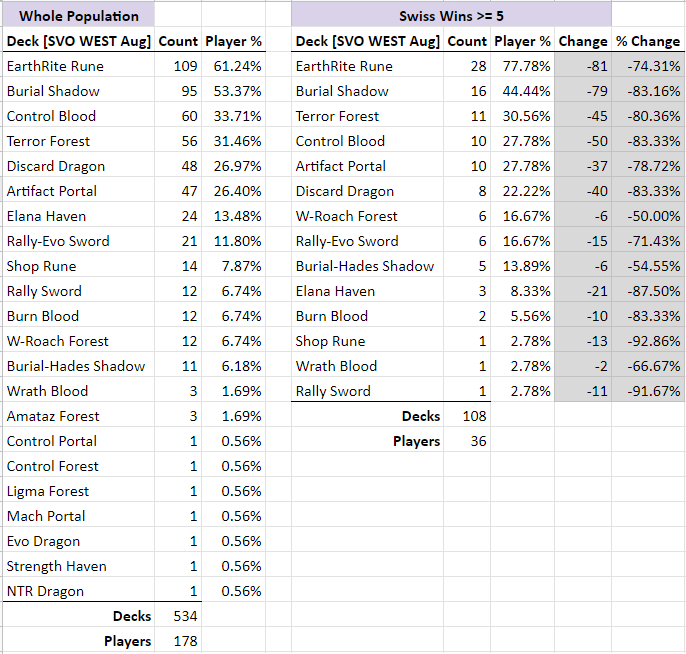 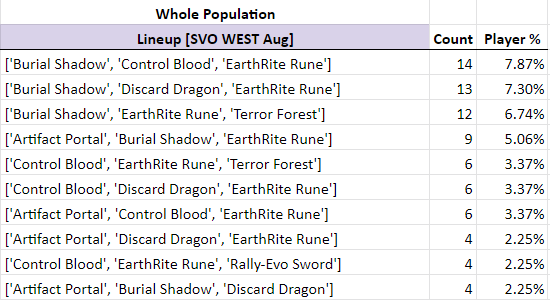 There were 178 valid check-ins as confirmed with the admins. 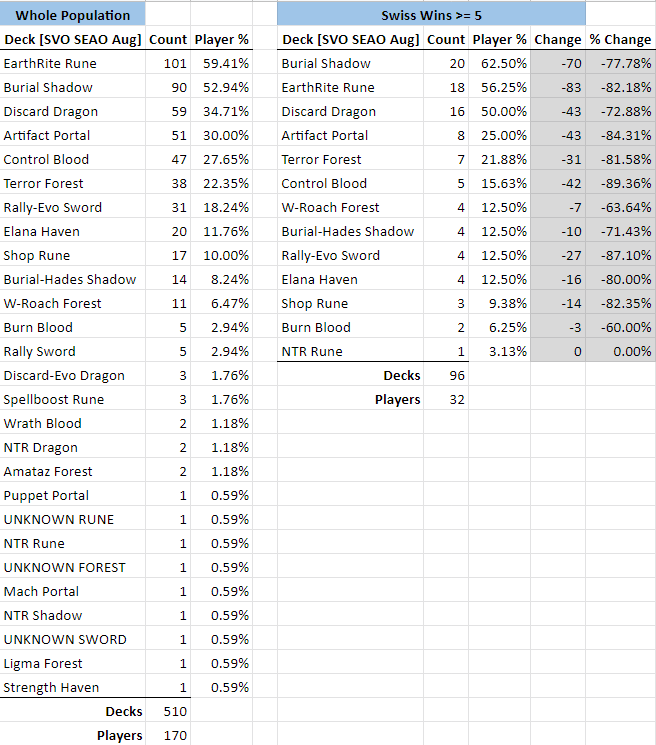 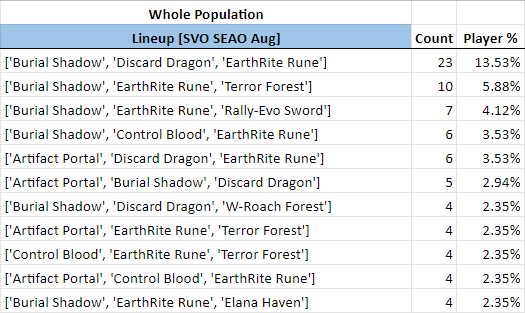 There were 170 valid check-ins as confirmed with the admins.

Over the course of the last month, players have been experimenting with different lineups and decks following the card changes which primarily affected Rally-Evo Sword. While the buffs to some of the cards were interesting, they had literally no effect with regards to August’s performance. For a very long time we have finally witnessed a meta where all 8 classes actually had a decent representation of more than 12% for each class across both region.

Comparing the representation across July and August, the previously three most dominant archetype in July EarthRite Rune, Control Blood, Burial Shadow has fell with Control Blood suffering the largest decrease. On the other hand the other five classes have seen an increase, with Artifact Portal having the largest increase.

Comparing regional representation in the month of August, there is a significant fall in Bloodcraft and Forestcraft for SEAO. Thankfully, the top 8 archetypes happens to correspond to the 8 different classes which makes it easier to explain the changes at the classes level by looking into the archetype level. Looking into the most salient changes in SEAO, more players have brought Discard Dragon, Artifact Portal and Rally-Evo Sword. The next two changes that are less obvious are Rune and Shadow.

The increase in Rune is actually due to an increase in Shop Rune players in SEAO (which I’m not gonna lie, is pretty annoying). The idea of bringing Shop Rune is to wage a psychological warfare on the opponent (at least it was for me). In most of the cases players are “forced” to ban Shop Rune, because who wants to play with an non-interactive solitaire deck?! At least for Luminous, one of the top 8 SEAO players, this tactic worked out pretty well.

Next, the increase in Shadow is caused by a small shift from Burial Shadow to Burial-Hades Shadow. What is the difference you may ask? To be frank, the line is getting increasingly blurred as there are more Burial Shadow running an 1-copy Hades with a small mix of the Shuten-Gremory-Legendary Skeleton package. However, there are also a couple of Burial-Hades Shadow that stuck more closely to the control aspect of Hades hence dropping/altering the ratio of Burial Rite themed cards in their decks. This brings me back to the conundrum that I had back in World Uprooted while choosing to define the various subsets of Shadow decks. To clarify, for this particular analysis, decks running 0-1 copies of Hades are categorized under Burial Shadow whereas 2-3 copies are under Burial-Hades Shadow (alongside other card identifiers and anti-identifiers). I have also scrutinized these decks and manually changed some decks to fit their respective archetypes.

Gee, maybe next month I should just aggregate these two decks together.

There really isn’t much to elaborate on for this month. The most popular lineup for SEAO right now is [‘Burial Shadow’, ‘Discard Dragon’, ‘EarthRite Rune’]. Once again, despite being the most popular lineup there was only one player with this lineup who made it to the playoffs, with a small cluster of players making it to 5-2 swiss wins. Referring back to July’s analysis, indeed players are getting more comfortable dealing with Burial Shadow, with some players tailoring their lineup to intentionally target it. When it comes to tech choices there isn’t much deviation from last month as well apart from Control Blood dropping off a couple of Razory Claw and Burning Constriction in favor of Romantic Chanteuse.

Many players have been harping about the diverse representation that this meta is “enjoying” right now. Enjoying is rather subjective, and does a diverse meta always means an healthy balanced meta? Probably, but some may disagree after looking at certain decks like Terror Forest, Shop Rune, and not to mention the “GO FIRST” situation for games involving Zelgenea as finishers for both sides. Again this is up to your personal judgment.

One big relief that we have is that for the month August, all top 8 players in both region have brought a different lineup. While there are still going to be some inevitable mirror games, I personally prefer watching games in Fortune’s Hand over the dreadful Machina Blood mirrors back in World Uprooted. Even though Zelegena is almost like a shadow of Al’Machinus in terms of its power and representation, I very much welcome this variety and I hope that the coming mini-expansion would bring more exciting changes. Keep experimenting, keep your monkey thoughts alive and bring more janky stuff to SVO. Make the next month (which is also the last SVO) count 🙂