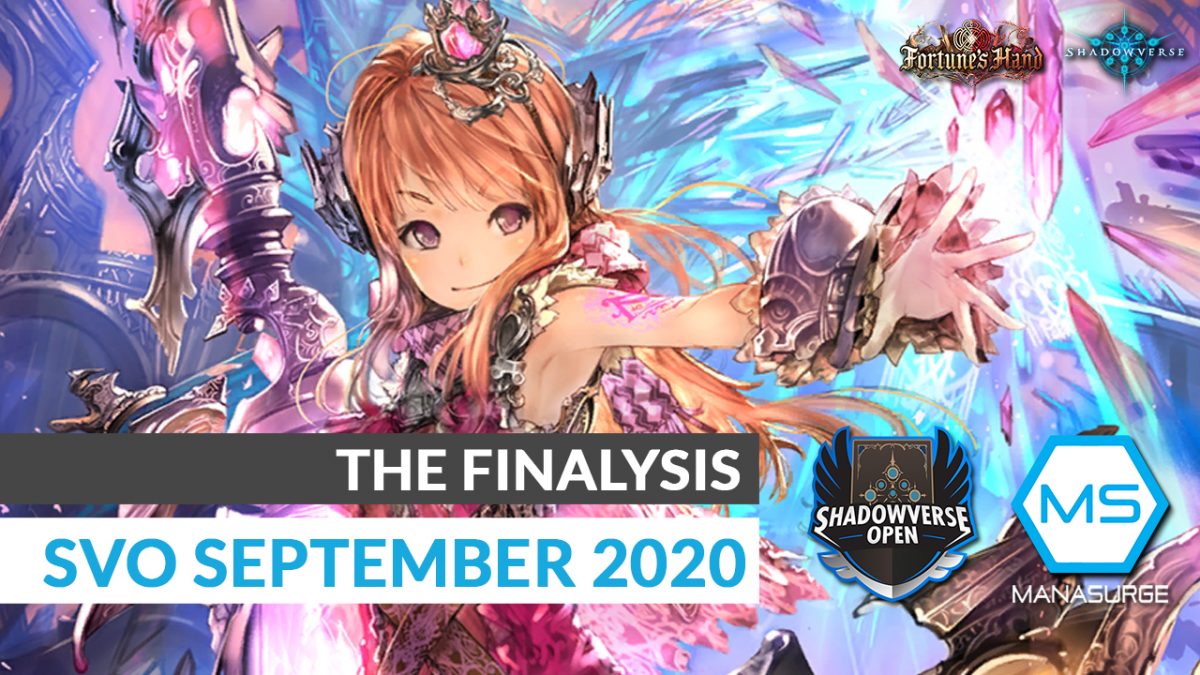 It is finally the last month of the Fortune’s Hand expansion, and also the final month for SVO!

For new readers, the purpose of the SVO analysis is to explore what are the popular decks and lineups. For more information regarding SVO and the methodology taken in analyzing the data, you can refer to July’s analysis. 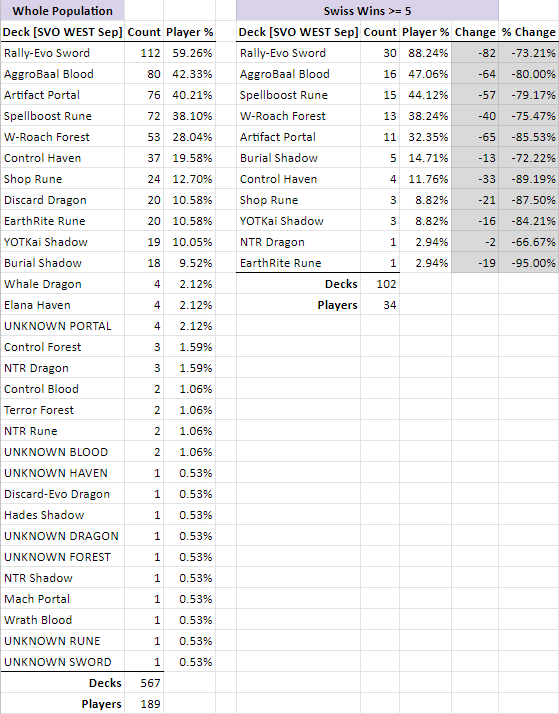 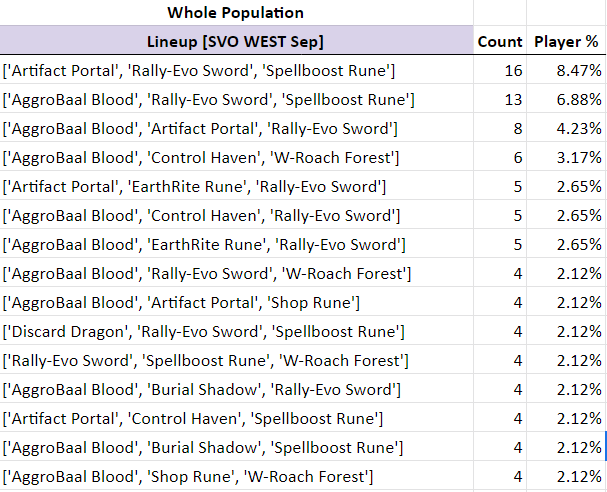 There were 189 valid check-ins as confirmed with the admins. 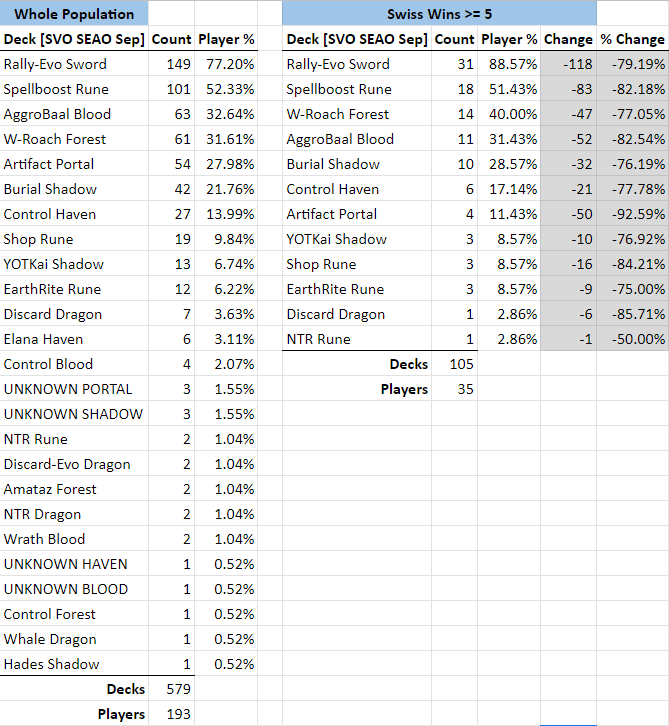 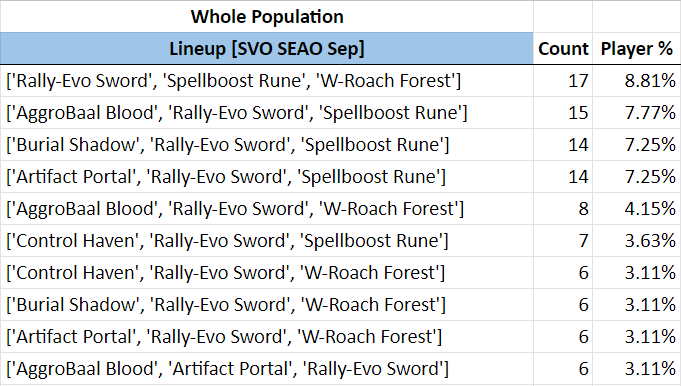 There were 193 valid check-ins as confirmed with the admins.

This month, I was able to extract data from battlefy pertaining the details for each match and their games. A table of descriptive statistics using the same data. Reporting discrepancies have been dealt with by dropping problematic records and we are able to extract the Win/Loss/Ban numbers for each deck archetype.  Win Rate is considered to be naive because it is calculated using numbers and does not account for its varying performance against different matchups.
Naive Win Rate = W/Games Played,  where Games Played = (W+L). Does not consider matchup involved
Ban Rate = B/Cases, where Cases refers to the number of matches where the archetype was involved.
**Cases double-counts if both players brought the same archetype in the same Swiss round. 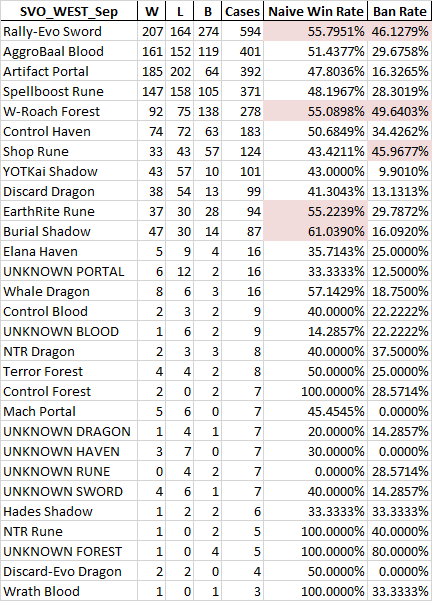 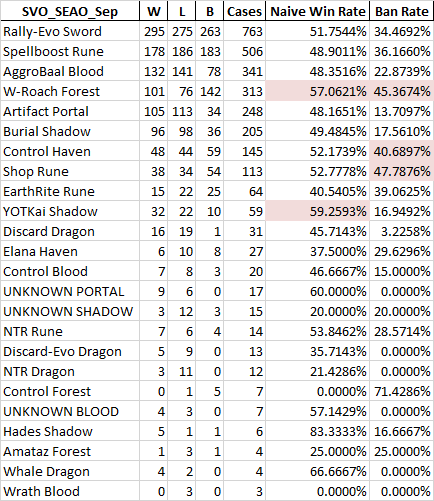 Note that a bias may exist because of cases where players simply stayed for packs after going X-2, resulting in some untruths in the data. Additionally, because of this problem, there is also difficulty in creating a matchup matrix since the data is distorted which will cause some matchup percentage to go haywire. As such I have decided not to include it. For a detailed matchup matrix for the Ranked environment please refer to Shisogenius‘ Insights. So please take the above with a grain of salt.

Fortune’s Hand in my opinion was an interesting expansion. It was vastly different from what I envisioned back in June’s Finalysis and it turned out to be one of the most diverse meta we’ve seen in a long time. There is nothing much really to dissect for this month. Since most of you readers should more of less have a grasp of the meta over the past months, I’ve decided to provide more numbers and let you the readers draw your own insights 🙂

While SVO has come to an end for 2020, it might also be a good time to take a break from Shadowverse or take it easy, seeing that there will be no major tournaments in the foreseeable future for the next expansion. Of course, this also marks the end of SVO Finalysis for the year 2020.

It has been a fun learning experience for me sharing my monthly Finalysis since March and my sharing have helped or augment your knowledge on current metas. If any interested readers wants insights for community hosted tournaments on battlefy, I would be very willing to help. (drop me a DM!)