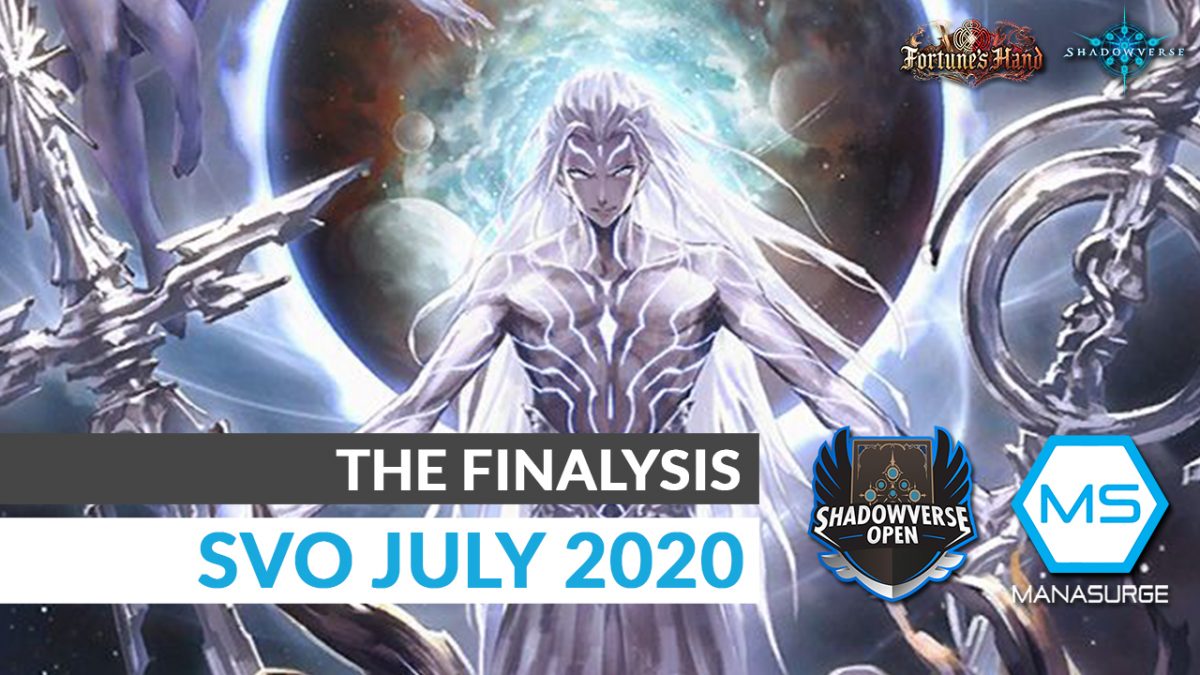 Welcome back to the monthly SVO analysis! This month, we kick start off with the latest expansion Fortune’s Hand where players were introduced with a variety of new decks and lineups.

For new readers, SVO is a monthly tournament that starts off with a preliminary Swiss Bracket of 7 rounds in Day 1. Participants with 6-1 results are promoted into the playoff brackets to distill down to 8 players who will play in Day 2. The purpose of the SVO analysis is to explore what are the popular decks and lineups. We hope that the data would be able to give interesting insights and reveal strategies that are prevalent and relevant in the 3Deck1Ban Rotation format.

In order to determine what decks are strong or popular, we need to first be able to identify what the decks used are. A spreadsheet of the decks brought by the participants are provided by the SVO admins, which is then run through a program to decode the URLs. The class and cards were identified and were subsequently used to discern the respective deck archetypes. Certain decks that were not captured by the deck definitions and their identifying cards were manually inspected and sorted to its appropriate archetype or otherwise, be parsed as UNKNOWN if it does not fit any of existing Rotation archetypes.

As noted by the admins, there were some discrepancies in the class icons used in the battlefy platform. This means that we are unable to use the statistics provided by battlefy as it would be inaccurate. Furthermore, using classes as compared to deck archetype as categories would be too broad. Hence, we are unable to gather data from the match-ups between each deck archetype. The other available data would be the number of Swiss Wins that each player has. Using the number of Swiss Wins, we can set a benchmark to broadly categorize players who did well and those who unfortunately did not*. A Swiss Win of 5-2 was used as a benchmark as it captures an adequate size and accounts for players who were close to qualifying for the playoffs.

*Note: This does not however accurately reflect the skill of a player. Our ultimate goal is to gather insights on the decks and lineup. 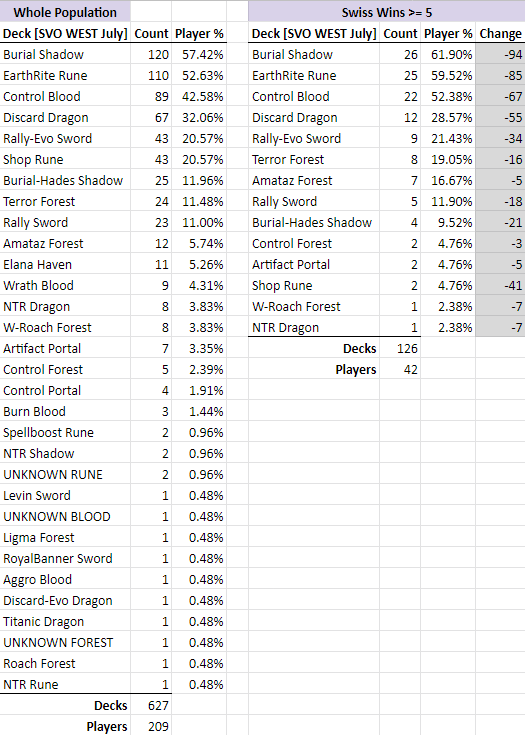 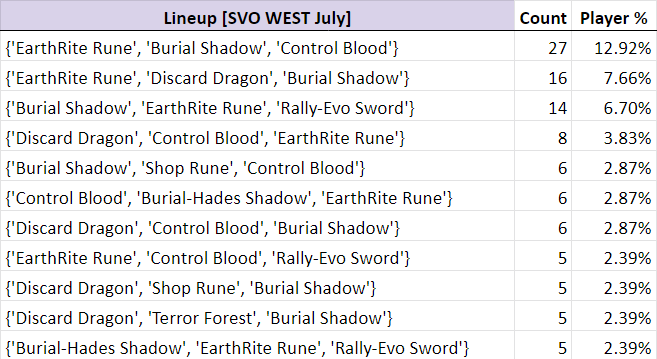 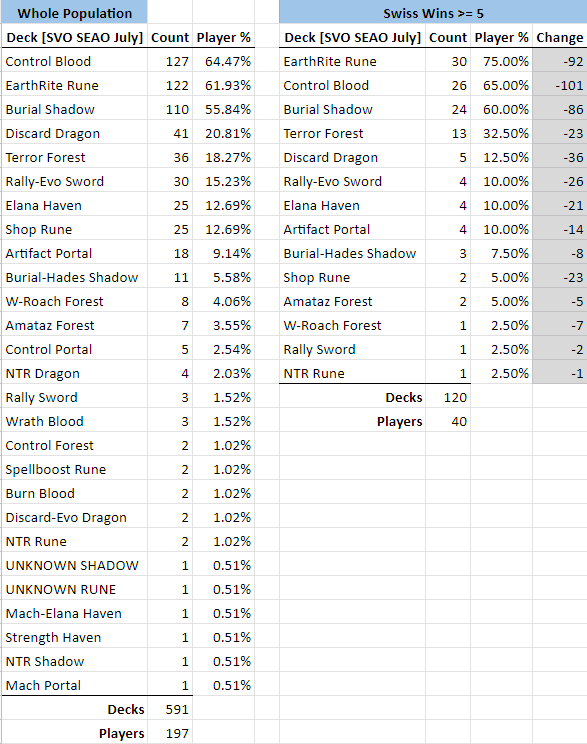 **There were 197 valid check-ins as confirmed with the admins.

[1] The Best Decks and Card

Control Blood and EarthRite Rune have taken the throne of the most popular decks in July. Other notable decks that have high representation across both regions includes Burial Shadow, Discard Dragon, Rally-Evo Sword and Terror Forest. The two prominent combination found in both regions were {‘EarthRite Rune’, ‘Control Blood’} and {‘EarthRite Rune’, ‘Burial Shadow’}. The third deck would largely determine the strategy of the player; to either target a specific deck, or to play with comfort decks.

The most notable card is definitely XXI. Zelgenea, The World, an amazing neutral card that: heals, removes huge threats, draws, and functions as a late-game finisher for some decks. This card is so amazing that it literally gives every deck an access to a pseudo-vengeance mechanic at 14 health. Interestingly, EarthRite rune have also begun to run copies of The World since the deck have previously struggled with heals. In total, there 311 and 226 decks that uses at least one copy of The World in SEAO and WEST respectively.

Even though we are about to hit the first month of the Fortune’s Hand expansion, the meta continues to evolve and  players have been experimenting with different counter-measures and techs to fight against the Tier 1 decks. Looking at the SEAO representation vis-à-vis WEST representation, there was an uptick in Terror Forest, Elana Haven, and Artifact Portal.

Terror Forest has made quite an appearance in the recent JCGs and continues to be a choice deck for players who likes early tempo and operating the good ol’ “Terror Blender“. The deck looked decent during the WEST SVO and seemed even better during the SEAO SVO. Terror Forest is hugely favored against Shop Rune, a detestable deck which somehow has a decent representation across both WEST and SEAO. However, it faces some difficulty when playing against Control Blood and EarthRite Rune; both decks which run their respective “NO U” cards: Azazel, the Depraved and Forbidden Darkmage respectively.

The latter two decks are more interesting. Elana Haven runs Yukari, Holy Guardian which is a great tool to fend against any effect damage. This is thought to be a counter to Control Blood which runs several burn-effect cards. While Elana Haven has lost its Machina support and regressed to a more midrange playstyle, it’s role is still relevant against Control Blood and EarthRite Rune thanks to Yukari. This lady grants Elana Haven access to an unique one-sided setup with The World on Turn 10, which protects your leader and your board from effect damage (which usually is another The World from your opponent). Sadly, in both regions there were no Elana Haven players who made it to the playoffs.

Artifact Portal has also been gaining traction recently in SVO and the Pro Leagues in Japan. While the deck last lost access to Shion and Augmentation Bestowal, it still has ways to generate artifacts to generate incremental value from Absolute Modesty or discounting Paradigm Shifts. Alternatively, players can also opt for another win condition if they are unable to create enough pressure through artifacts; surviving to the Turn 10 finisher with Vesha from an enhanced Awakened Ragna with The World’s invocation.

In terms of tech options, the most notable ones were Romantic Chanteuse and Cloud Gigas. Romantic Chanteuse is a useful card to fend primarily against Discard Dragon’s Shipsbane Plesiosaurus leader effect and The World’s Turn 10 Invocation leader effect (which most of the decks run). Cloud Gigas on the other hand is an rather suspicious card that is only teched in Burial Shadow and Burial-Hades Shadow. Apart from Turn5 Milteo plays, slamming down Cloud Gigas on its own is usually an awkward play as it doesn’t really help with Shadow’s game plan that much. In total, there were 31 and 45 decks that uses at least one copy of Romantic Chanteuse in SEAO and WEST respectively, where the majority were seen in Discard Dragon. 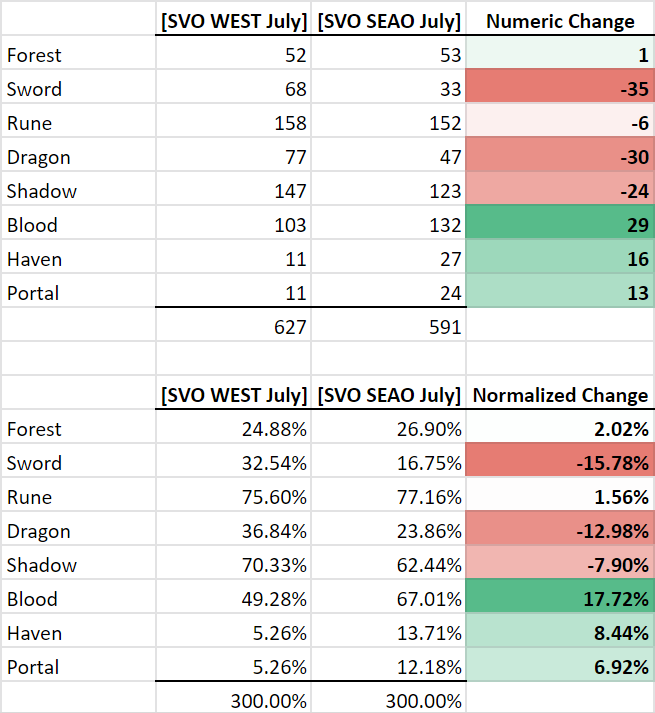 Comparing the change between WEST and SEAO, there are two salient trends that we can observe.

First, there was a significant rise in the number of Control Blood players. As a result, there was also an significant rise in some lineups. More SEAO players have doubled-down on the {‘EarthRite Rune’, ‘Control Blood’, ‘Burial Shadow’} lineup, resulting in a +8.91% growth based on proportion of players. We can expect Control Blood to maintain a high representation. In response, there could be an increase in the number of counter decks which is also seen in SEAO, such as Elana Haven.

Second, there was a significant drop in the number of Swordcraft players. When all variants of Swordcraft decks were aggregated and compared, we notice a -15.78% drop in player representation for SEAO.
A closer look into the underlying reason reveals that there were significantly less players using Rally Sword, the more “aggro/tempo” iteration of Swordcraft in this expansion. There were 23 players in WEST and only 3 players in SEAO, which translated to a -9.48% (1.52%-11%) drop in Rally Sword representation in SEAO.

The majority of SEAO Swordcraft players were using Rally-Evo Sword, which was either geared towards a “control” version with Regal Wildcat and The World as a finisher, or a hybridized style which incorporates Rally mechanics, some elements of Evolve/Union Burst effects while maintaining a decent tempo. There were 43 and 30 players in WEST and SEAO respectively, which translated to a -5.35% (15.23%-20.57%) drop in Rally Sword representation in SEAO.

Similarly, there was also a significant drop in the number of Discard Dragon players. This could possibly be SEAO players anticipating a rise in Terror Forest, Control Blood, and Burial Shadow. Additionally, with the increase in the number of decks running The World, Discard Dragon faces an increased difficulty since more decks are now able to heal so much, it sets back the Discard’s plan to a considerable extent. Furthermore, the pressure from Burial Shadow also makes it somewhat troublesome for Discard Dragon to deal with especially when Burial Shadow sets up chains of Storm after Storm while maintaining a decent board.
.

Third, we can expect to see a decline in Burial Shadow. While Burial Shadow has already proven itself to be a strong midrange deck, it has been increasingly targeted in the 3Deck1Ban format. More players have begun to even drop Shadowcraft in their lineup to prevent themselves from getting sniped and to snipe other players. In the recent EarthRite Rune article posted by TS Noire, it was explained how EarthRite Rune was favoured against Burial Shadow. Control Blood is another popular deck which poses a threat as well since the deck runs numerous tools to survive and deal with Shadow’s board.

Looking at the results of SEAO, even though {‘EarthRite Rune’, ‘Control Blood’, ‘Burial Shadow’} was the most brought lineup, none of the players made it to the playoffs. Perhaps it is a hint to players that if you have a brilliant idea to counter your opponent in a 3Deck1Ban format, then you should probably do so. In the weeks leading up to the SVO, there have been a lot of discussion on twitter regarding plans to deal with popular decks, more specifically plans against Burial Shadow. It will be interesting to see if there would be more counter lineups/strategies/techs finding the same consistent success as the current strong decks in the near future.